A Walk Under The River

There are three accessible pedestrian routes under the River Thames. The Greenwich and Woolwich Foot Tunnels are both well known and well used, I've been through both of them on many occasions. The third one came as a bit of a surprise to me. 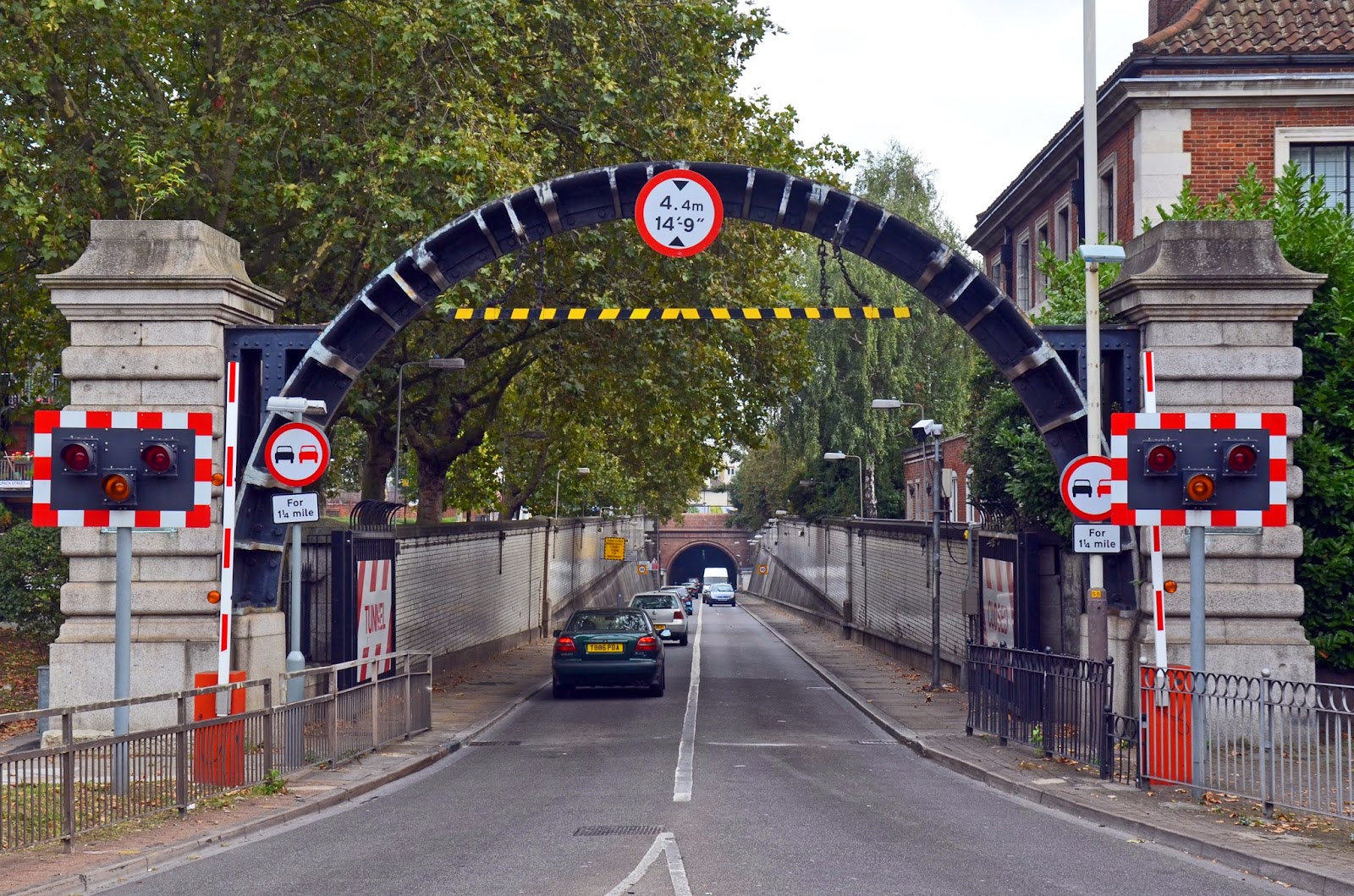 Work on the Rotherhithe Tunnel commenced in 1904 and it was opened by HRH  The Prince of Wales (later King George V) in 1908. Linking Limehouse  on the north bank with Rotherhithe on the south, it was designed to provide a means for pedestrians and horse drawn traffic to cross the river without the need to travel west to Tower Bridge or east to the Blackwall Tunnel on the other side of the Isle of Dogs. Obviously, horse traffic eventually gave way to the ubiquitous motor vehicle and it is still an important, and heavily used, route from north to south but I had no idea that it was still accessible to pedestrians. According to Wikipedia around twenty pedestrians still use the tunnel each day! 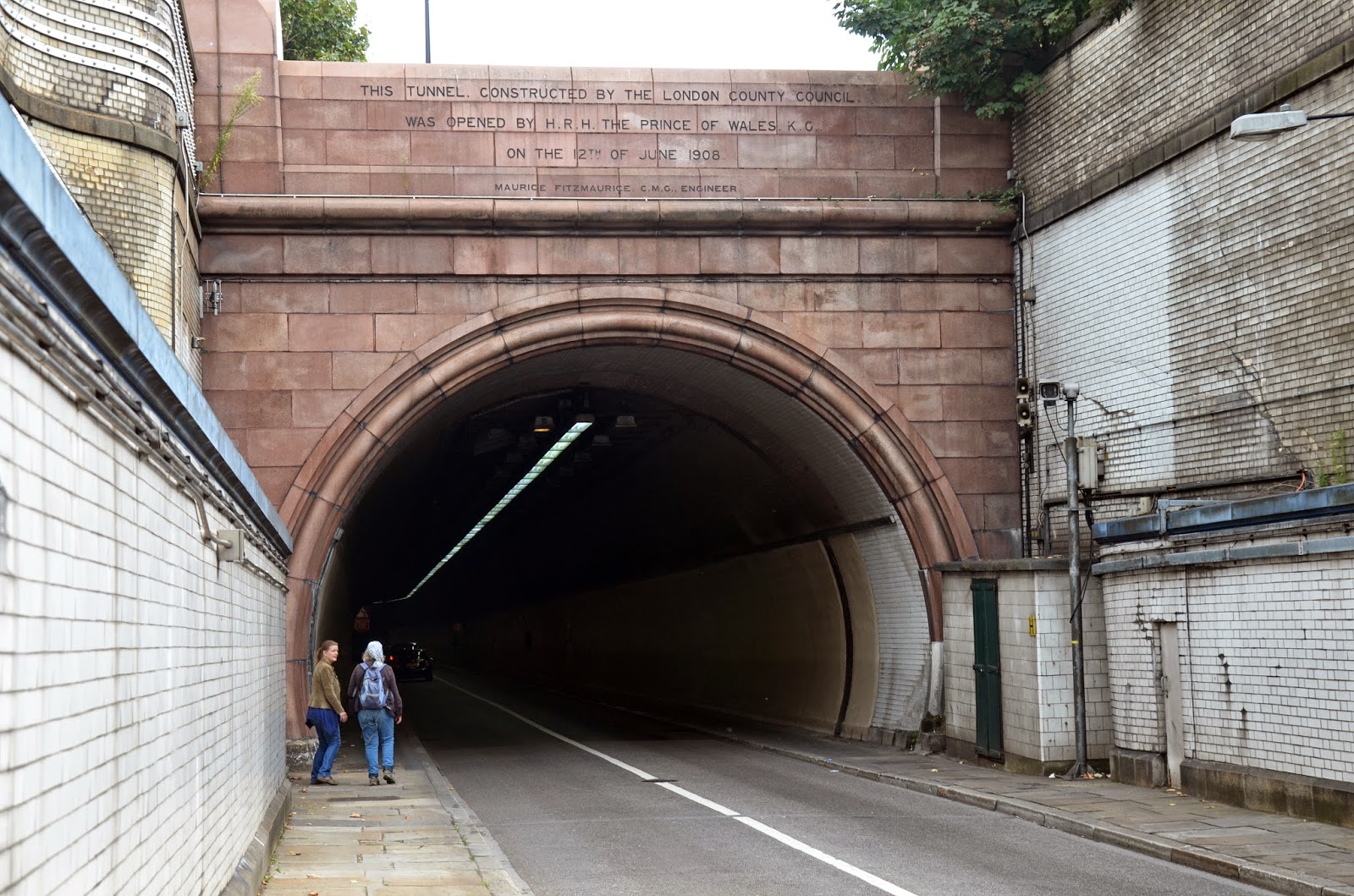 So, this morning, I joined two friends, Jane and Jen to check it out for ourselves. it was a remarkably stress free journey. The pavements (on both sides) are around four feet wide and the speed limit is 20mph so, all things considered, it was probably much safer than the average country lane. The lighting was a pretty good and there were signs, indicating how far you have travelled and how far you still had to go, at regular intervals. I have to admit that air quality was not exactly brilliant but was not as bad as you might expect. 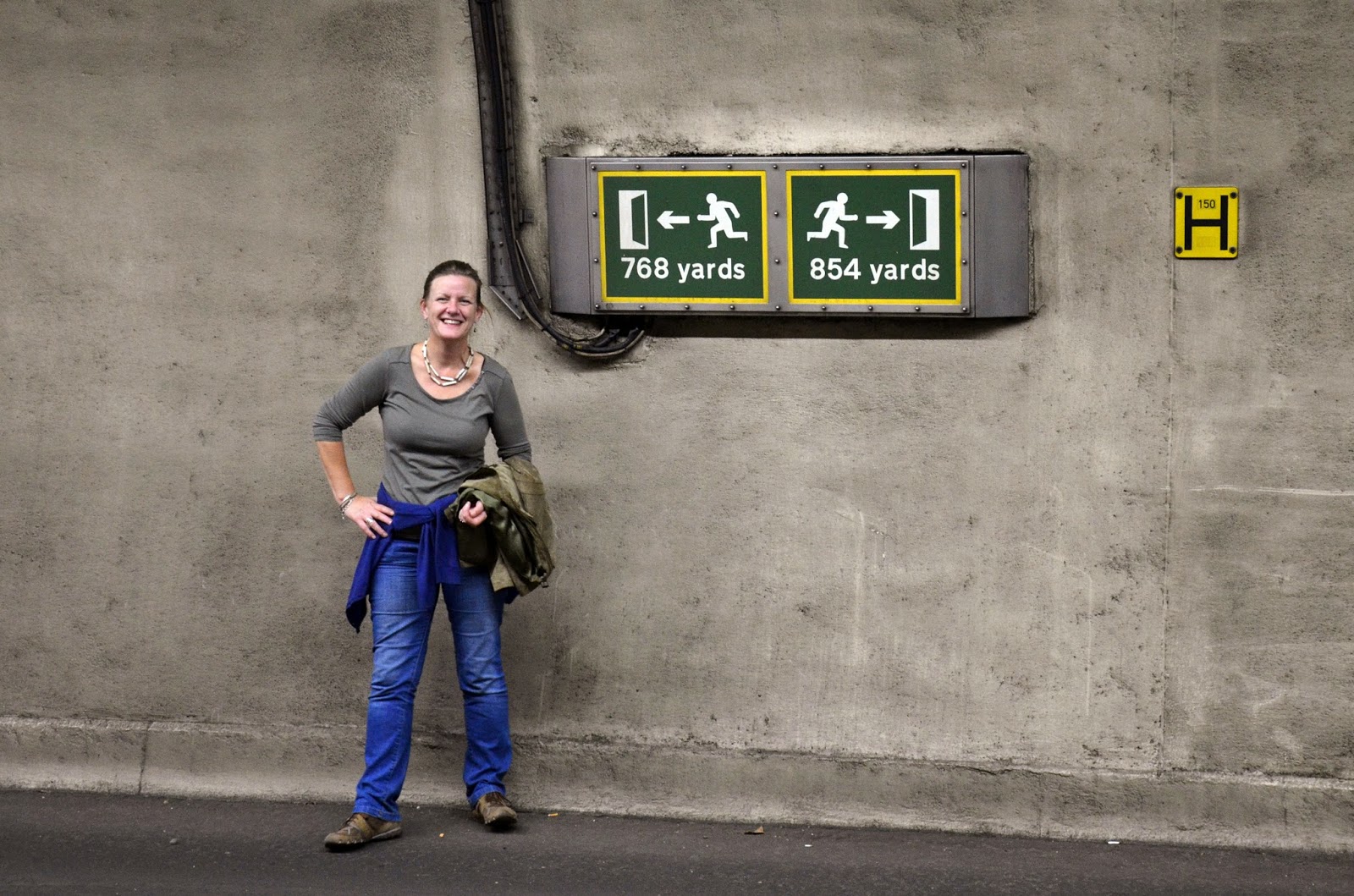 After a walk of just under a mile and reaching a maximum depth below the river surface of  approx. 75ft we emerged into the sunshine and the (relatively) fresh air of the north bank. Overall, an interesting experience but probably not one I'd care to do on a daily basis. 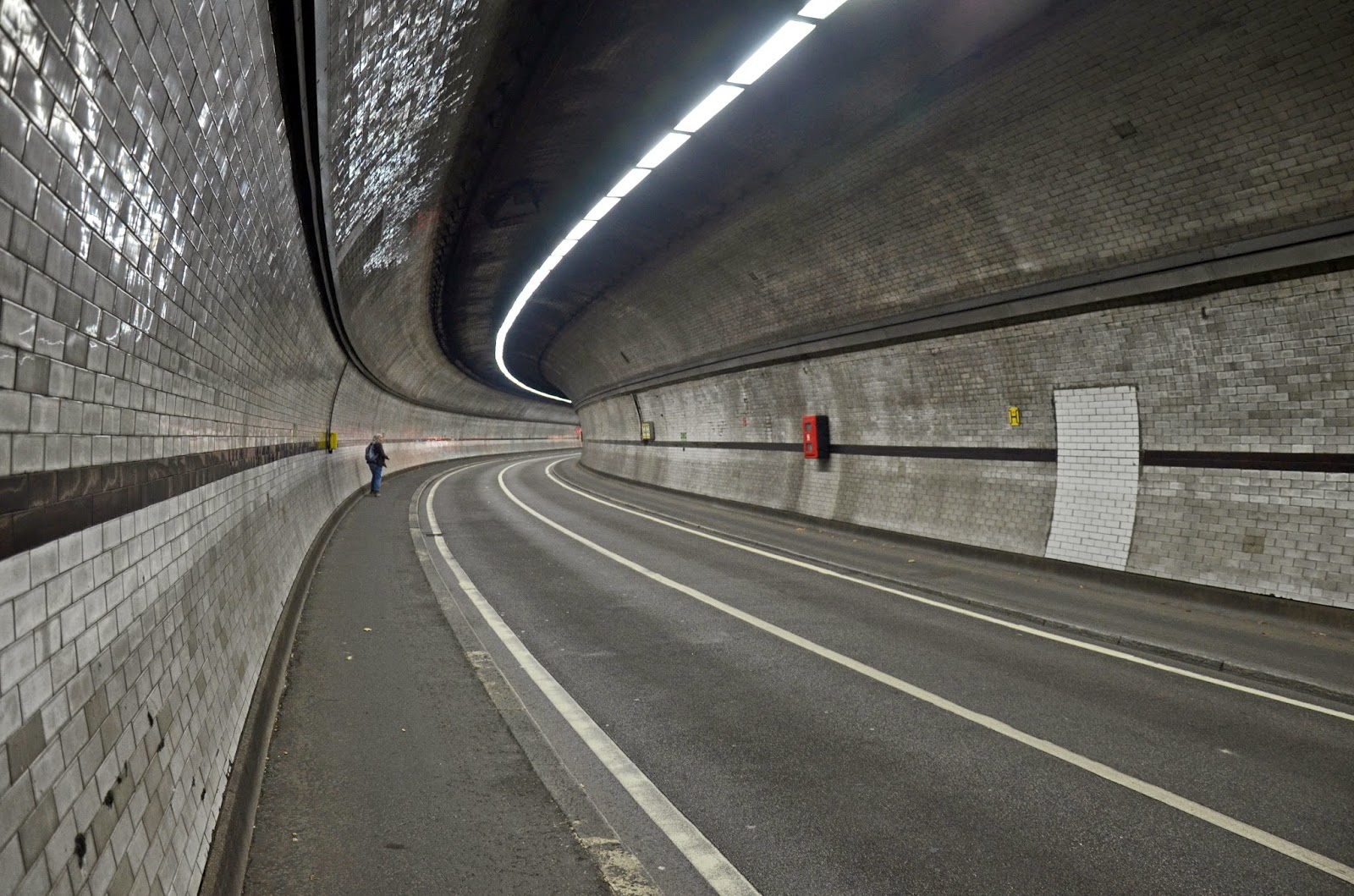 It is a little known fact (?) that beer is the perfect antidote to a potential exhaust fume overdose and to that end we made our way to the Old Ship pub on the delightful York Square E14 (recommended, by the way) for a pint or three. A nice way to end a nice day in good company. 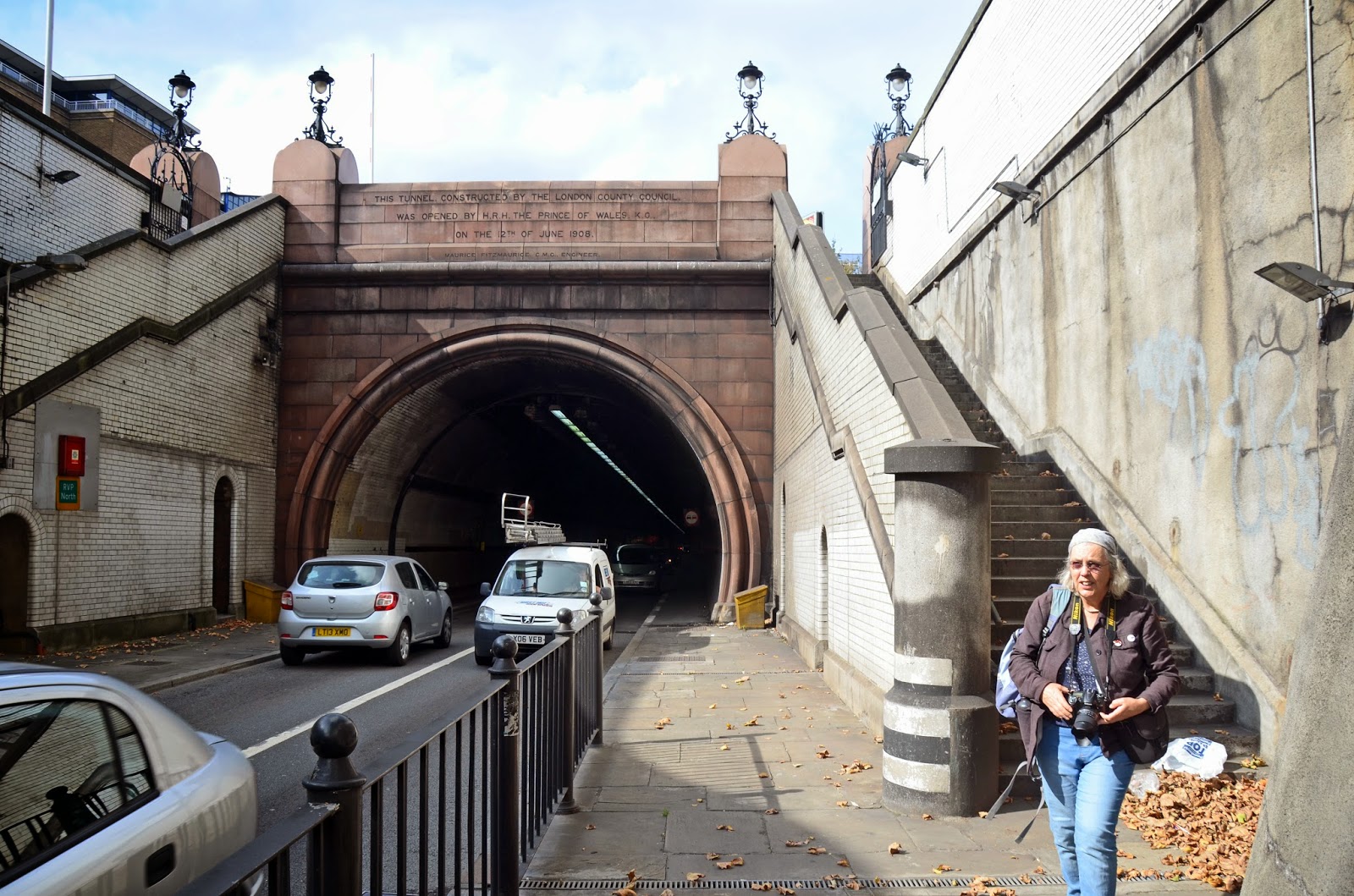 By the way, it was a good job that Jane had her breakdown before entering the tunnel as we didn't have a vehicle to return to! 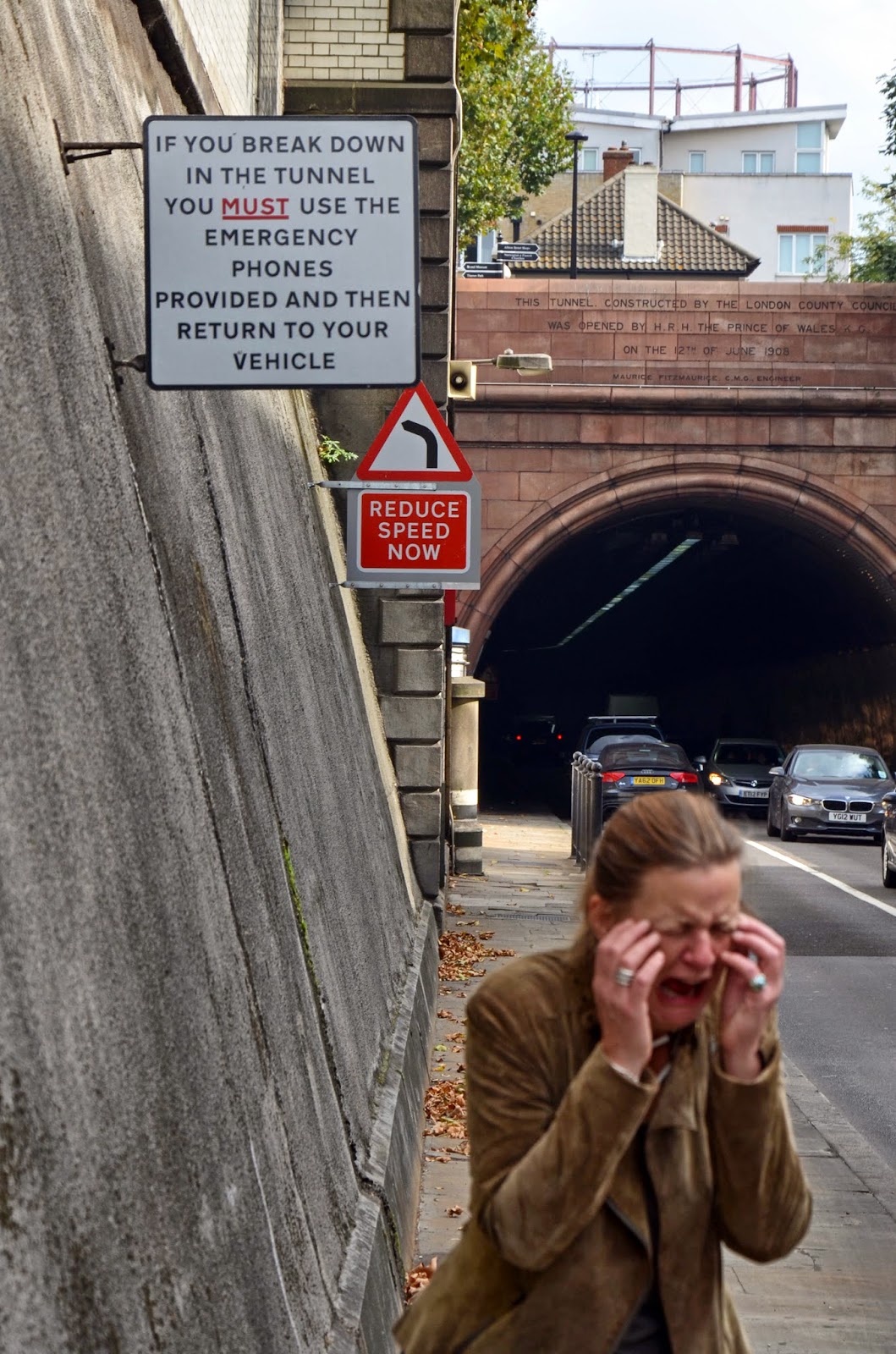 Posted by Malcolm Edwards at 16:32

Malcolm Edwards
Notting Hill, London, United Kingdom
I'm a middle aged (some may say late middle aged!) male living in Notting Hill. I've lived my whole life less than 1 1/2 miles from my place of birth. Does that make me unadventurous or content with my lot? I'll leave that for you to decide. Should anyone feel a desperate need to contact me, try malcnhg@hotmail.co.uk STOP PRESS - according to a friend, I am now officially old!

So, what is this London Ramblings thing going to be all about......

What I can tell you is that I'm a Rambler, not the shorts, hiking boots and bobble hat kind of Rambler but an Urban Rambler. There are a lot of us about, you may not have noticed us, but believe me, we are there. We're the ones walking down the street, probably with a camera, looking at ghost signs, old shop fronts, aging street furniture, ephemera, odds n ends, bits n pieces, whole buildings, bits of buildings, street art and oddities. We're the ones who don't have our heads down staring at the pavement. We're the ones looking up and behind and down side streets. We're the ones who quite often don't get where we're going because we've been diverted by something else. Love us or hate us, we are there!

As a friend of mine pointed out, rambling can have several meanings. I'm not entirely sure that I know what she means by that, but I don't think it was a criticism

I'm quite intrigued to see where things go from here, watch this space.